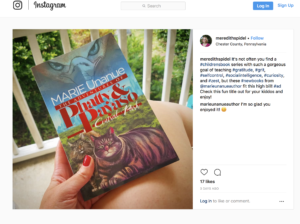 Check out the Books By Women Blog here!

My girlfriend, along with a very large glass of wine, had convinced me that the story of the friendship uniting our two mismatched cats needed to be told. Like I said, it was a massive glass of wine. However, with or without the wine, the story of our two cats was pretty incredible. Despite being apart six months out of every year, they had managed to maintain an extraordinary friendship as if no time had passed at all. Despite the time spent apart and the differences in their personalities and feline backgrounds, they were inseparable.

By the time I sat down to write this tale, my enthusiasm and excitement were off the charts. I had convinced myself that every child in the world needed to hear their story and would be all the better because of it. Writing the initial story about the animals was liberating and actually quite fun. Imagining what they would say and how they would interact was pure enjoyment. I felt unstoppable. When I had finished, I had written a tale where all of my animals were out in the ‘real’ world. I had given them character traits, weaknesses, and strengths, and they came to life on the page. Then, when I read it back to myself, it hit me: what am I going to do with this story?

Now that the first draft was down on paper, a mixture of emotions surfaced. I was consumed by a dreaded mix of insecurity and doubt. I looked around the apartment and said, ‘ok, now what?’ It was the first time in my adult life that I had free time on my hands, and all I could think to do was make my animals talk? Crazy much?

As I reread the bulk of my story out loud, I thought for sure I had lost my mind. I looked over at my dog, who of course was gazing at me like I was the next Jane Austen, when it hit me. This idea could either go over big or could very well be the most embarrassing endeavor I had ever embarked on. Here, I had just gotten married and found myself out of my league at social and philanthropic events, now I was about to add another new element to the mix — another arena I could potentially fail in.

It was settled. I couldn’t let anyone read it. I had decided that despite the dogs’ encouraging nods, I had sounded like a complete lunatic. At the time, I was a 37-year-old newlywed, with no children to speak of, no formal education on writing, and no training at all on how to how to accurately tell a story, let alone write one for kids. I shamed myself into shutting down the computer and refusing to touch the story again.

It was a year later when my dear friend, Payaso’s mom, had asked me to share with her what I wrote. I’ll be honest when I say, it took every ounce of courage I had to let her and my husband read my story. To my shock, the two of them enjoyed it. This gave me the surge of confidence I needed to continue. They pushed me to enroll in a writing class to fine tune my writing skills and increase my confidence as a writer. They then encouraged me to share the story with other people for feedback. That’s when I had two dear friends, both writers, Michael & Craig, read the manuscript. I asked them for complete honesty.

I can still remember the raw emotion as I waited to hear if they liked it or hated it. The feeling of vulnerability consumed me. I was never the best speller or an A+ student, and if I was sure about one thing, it was that time hadn’t improved my ability to write. The embarrassment and worry I felt over every grammatical error rang like an alarm bell in my head. I was an emotional wreck.

After they read it, they had a mixture of feedback, some good and some bad and as it turned out, the negative comments were the best part. Hearing their criticism only helped to improve both the story and my writing skills.

They liked the bones of the story; it needed a bit more of this and that, but the message was there, the characters were great, and at that point, that’s all that mattered. They explained to me that no writer was perfect with grammar. In fact, that’s what editors were for. No writer nails it on the first go, and that’s why every book ever written has undergone revisions. Hearing the truth about writing saved me, and to be quite honest, that ‘truth’ is what got this book across the finish line.

I want other new authors to know that writing a book isn’t only about the excitement you feel in the first few months while you’re creating the story. It’s also about the months of determination — the endless hours, emotion, and hard work that goes into the re-writing that makes this process the tremendous accomplishment that it is. Writing a book isn’t just a complicated process, it is about being willing and able to put yourself out there.

With any luck, I will continue to evolve as a writer and I know I won’t give up. Because in the end, if one child reads this book and treats another child better because of it, then all of this hard work will have been worth it.

—
Marie Unanue has always been an avid reader and an activist for children who are bullied. As a kindness advocate, she hopes to inspire children across the world to remember to always treat each other with kindness and compassion. She is the former anchor of “Travels with Marie,” a weekly travel review program. Marie resides with her husband Andy and their animals in NYC and Mantoloking, NJ. Visit her at www.letsallbekind.com which launched this May.

The Adventures of Phatty and Payaso: Central Park

Phatty the cat loves nothing more than spending his days balanced atop his favorite chair gazing out his windows at Central Park below. Everything is simply fan-tabby-lous until one day when the meanest hawk in the park lands on his terrace and makes a terrifying announcement that he is coming for Phatty and his furry little friends.

Over the years, my daughter and her friends have devoured various book series whose main characters were animals. I’ve wondered if it was the idea that their beloved pets were out living adventurous lives that kept the kids mesmerized, anxiously awaiting the next book in the series to be published. How clever, I thought, those authors are to turn animals into heroes and villains.

So when JKS Communications reached out to me about a new series based on cats, I was like, “Okay. My kids like cats. I’ll take a look and see if it is a good fit.” I can’t tell you how pleased I was to find that “The Adventures of Phatty and Payaso” is unlike all the others for three main reasons:
* The main characters are minorities
* The book actively seeks to teach character skills lacking in today’s children
* The storyline focuses on bullying.

Let me tell you the storyline first. So the main character, Phatty, is a fat cat who loves to spend his time sitting on his favorite chair and gazing out the window at Central Park. One day, the meanest hawk around lands in his window and begins to threaten him and his friends. At first, Phatty is terrified, but eventually, he musters up his courage to go alone to Central Park to stop the bully. When he doesn’t come back, Payaso sets out to find his best friend, Phatty.

The three main characters reflect three different minorities: an overweight cat, a Latino cat, and a boy on the Autism spectrum. I just love the diversity that is being represented even in an animal-dominated book.

But you know what I love best? It’s the fact that the author, Marie Unanue, is a kindness advocate who wrote this book to help children who are being bullied. She actually thought this storyline out carefully and used a teacher’s resource – CharacterLab.org – to help her focus on key traits that she believes today’s children often need to develop. These traits are:
Curiosity: Taking an interest in ongoing experiences for their own sake; finding subjects and topics fascinating; exploring and discovering
Gratitude: Being aware of and thankful for the good things that happen; taking time to express thanks.
Grit: Finishing what one starts; persisting in a course of action in spite of obstacles
Self-control: Regulating what one feels and does in the service of goals and standards; being disciplined; controlling one’s emotions.
Social intelligence: Being aware of the motives and feelings of other people and oneself; knowing what to do to fit into different social situations; knowing what makes other people tick.
and zest: Approaching life with excitement and energy; not doing things halfway or halfheartedly; living life as an adventure; feeling alive and activated.

The characters in the book each reflect one or more of these traits and they teach them to each other…and hopefully the reader, too! For kids who may be suffering (or who have suffered) from bullying, this is a great resource.

Disclosure: I received a copy of these books for review purposes. All thoughts and opinions are my own.

Check out the Mommy Maestra